Flowers and Romance: Finding the Link 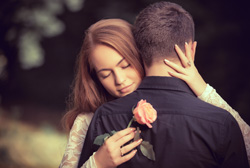 What is it about flowers that make women swoon? Research from France (where else) found that it may be deeper than a simple matter of societal influences. Or it may not be… either way I found this study by Nicolas Guéguen to be very interesting. I hope you will too!

In order to test how flowers increase a positive romantic response, Nicolas Guéguen of the Universite de Bretagne-Sud conducted the following experiment.

Guéguen enlisted 64 single women to participate in two related studies. First, he led each woman individually to a small room that had two arm chairs, a couch and a coffee table with a laptop to watch a video on it. For half the women, the viewing room was decorated with vases of flowers (roses, marigolds and daisies). For the other half there were no flowers in the room when they watched the video.

Interestingly, the women who had sat in the room with the flowers when watching the video reacted more positively to the man in the video, saying that they found him attractive and dateable.

Guéguen continued his experiment in “the real world”. He repeated the initial experiment, but this time he followed up the debriefing process with a young man in the room who they were told had just seen the same video. After a few minutes of questioning the woman’s feelings about the video,Guéguen would excuse himself from the room claiming that there was a computer problem he had to deal with.

This was the young man’s cue to attempt a pick up… he’d smile at her and ask if she’d like to get a drink with him sometime. Eighty one percent of the women how had watched the video with flowers in the room gave the young man their number and agreed to the date. In comparison to the fifty percent of the women who agreed after watching in the non-flower decorated room.

He reports, “It may be that flowers act as environmental cues that, in turn, affect a woman’s behavior and her perception towards a man.” He also notes that there was another experiment that found that even an image of a flower “increases activity in the facial muscles associated with smiling” as well as research that links relaxation with exposure to nature (I don’t know about you, but I don’t need research to prove that last one!)

Guéguen writes that the symbolic association that links romance and flowers can be activated even if the flowers are in peripheral vision.

Bottom line: If you want a better chance of a woman saying yes to a date with you, ask her out near a flower shop and if you want the date to go well, maybe take her out for a picnic at the botanical gardens.