So Mothers Can Sleep: An Unsung Benefit of Breastfeeding 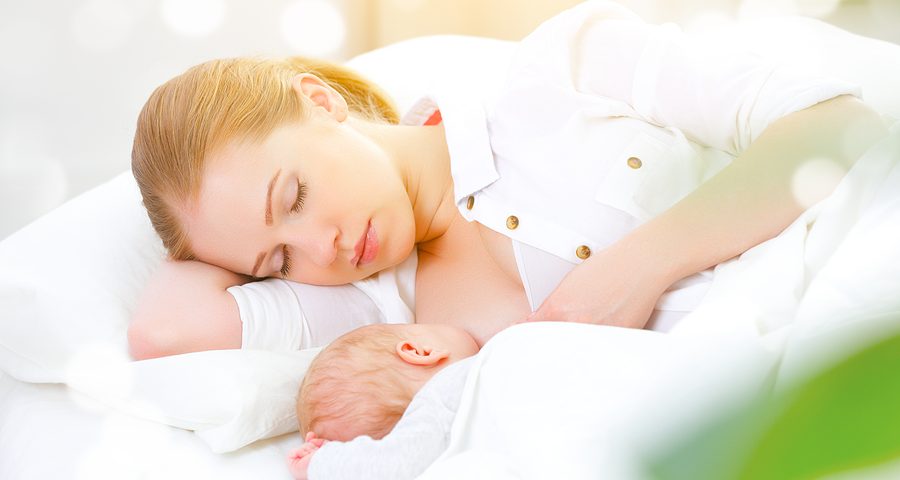 What’s the advice that practically everyone gives every new mother? Sleep while the baby sleeps.  Yet, take a survey of mothers and grandmothers, and chances are they will all admit they didn’t do it themselves. What they did do is “sleep while the baby nurses.” Yes, it’s true.

It works like this: Nipple stimulation releases oxytocin, which functions as a sedative, making mothers fall asleep sometimes within minutes, if not seconds, of instigating a feed – no matter what time of day or night. And in fact during the night, breast milk can contain high melatonin levels, which also induce sleep. In addition, breast milk supplies the amino acid tryptophan, known for encouraging deeper sleep as well. Not to mention, if you don’t have to hold a bottle upright, you don’t really need to stay awake.

Couple the sedative effects with the warmth of skin-to-skin contact with baby, plus sitting comfortably, often cushioned with pillows on all sides, and you have a recipe for sleep which is simply inescapable. And since newborns often feed for at least 45 minutes in any nursing session, a mother might even catch a whole sleep cycle.

Sleeping during nursing is especially useful considering mothers of babies are most likely in dire need of sleep, both because they are still recovering from birth, and are otherwise sleep deprived from the baby’s often incessant crying, especially at night during the first few weeks. As the baby gets older, his sleep might remain erratic (read: not enough napping during the day, and frequent wakings during the night), and therefore mothers continually need alternative times to catch some shuteye. Even as the baby’s feeds shorten to 20, 15, and then 10 minute-long sessions, these are still reliable and effective catnap (a.k.a. “power nap”) times for mom.

And that’s not all. Because of oxytocin’s sedative effects, not only will the mother likely sleep during the feed, she might also return to a deep sleep quicker than if she weren’t nursing. This means that during a nighttime feed, when the mother desperately wants to go back to sleep, she might do so without further ado. Some mothers even increase the chances for sleep by lying down on their sides to nurse, positioning their arm with the elbow bent, and their hand toward their head. Incidentally, this position is also ideal for a mother who had a cesarean section and is still too sore to sit up.

All told, breastfeeding a baby serves as a natural sleeping pill for the mother. Here we have the ultimate in passive multitasking: feeding your child while sleeping yourself.  Talk about easy efficiency. To be sure, breastfeeding is a learned skill, and its learning curve is highest during the first week or two. But once the latch is well-established, you’re usually off and running…or rather, sleeping.

A Note About Safety

If you are breastfeeding, assume you will fall asleep during a feed, and therefore there are some safety precautions to take. Namely, when you start the feeding, be sure that your baby is positioned in a way that she won’t fall, or get stuck with her face not exposed to air.

Most importantly, do not sleep with a baby if you have had too much alcohol or are using illicit drugs.

Assuming there is no alcohol or drug abuse, a nursing mother is very in tune with her baby’s breathing, even when she is sleeping, yet it’s still a good idea to be better safe than sorry with the setup. We wish you well in your nursing and sleeping relationship with your baby.